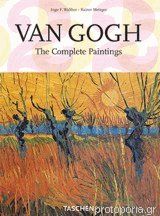 Vincent van Goghs story is one of the most ironic in art history. He lived an unhappy and difficult life during which his work received almost no appreciation—finally killing himself by a bullet to the chest, so great was his despair—and is now widely considered one of the most important painters of all time, his works fetching record prices of tens of millions of dollars at auction.

This comprehensive study of Vincent van Gogh (1853-1890) represents a rarity in art history: a detailed monograph on his life and art combined with a complete catalogue of his 871 paintings. This volume also reproduces most of van Goghs paintings in color for the first time.

The author: Rainer Metzger studied art history, history and German studies in Munich and Augsburg. He received his doctorate in 1994, and has worked as a fine arts journalist for the Viennese newspaper Der Standard. He has written numerous books on art and music, including volumes on van Gogh, Chagall, John Cage, and Erik Satie.

The editor: Ingo F. Walther was born in Berlin and studied medieval studies, literature, and art history in Frankfurt am Main and Munich. He has published numerous books on the art of the Middle Ages and of the 19th and 20th centuries, including TASCHENs Vincent van Gogh, Pablo Picasso, and Codices Illustres.