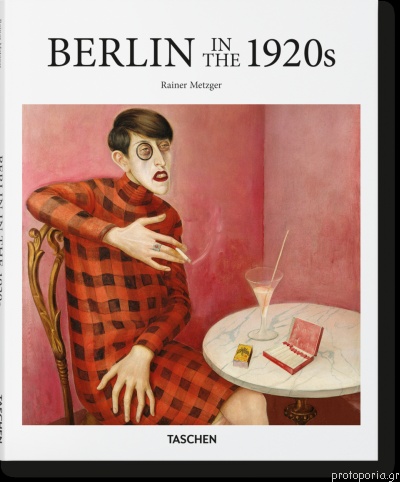 It was the decade of daring Expressionist canvases, of brilliant book design, of the Bauhaus total work of art, of pioneering psychology, of drag balls, cabaret, Metropolis, and Marlene Dietrich’s rising star in theater and silent film. Between the paroxysms of two world wars, Berlin in the 1920s was a carpe diem cultural heyday, replete with groundbreaking art, invention, and thought.

This book immerses readers in the freewheeling spirit of Berlin’s Weimar age. Through exemplary works in painting, sculpture, architecture, graphic design, photography, and film, we uncover the innovations, ideas, and precious dreams that characterized this unique cultural window. We take in the jazz bars and dance halls; the crowded kinos and flapper fashion; the advances in technology and transport; the radio towers and rumbling trams and trains; the soaring buildings; the cinematic masterworks; and the newly independent women who smoked cigarettes, wore their hair short, and earned their own money.

Featured works in this vivid cultural portrait include Hannah Hochs The Journalists; Lotte Jacobi’s Hands on Typewriter; Otto Dixs Portrait of the Journalist Sylvia von Harden; Peter Behrenss project of theAlexanderplatz; and Josef von Sternberg’s The Blue Angel, starring Dietrich as cabaret performer Lola Lola. Along the way, we explore both the utopian yearnings and the more ominous economic and political realities which fueled the eras escapist, idealistic, or reactionary masterworks. Behind the bright lights and glitter dresses, we see the inflation, factory labor, and fragile political consensus that lurked beneath this golden era and would eventually spell its savage end with the rise of National Socialism.