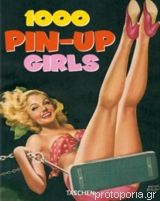 "Girls, Gags and Giggles" - this was publisher Robert Harrisons recipe for dishing up the American pin-up to the U.S. male. In the 1950s his girlie magazines sold by the millions, before becoming icons of pulp and trash culture.

These skilfully illustrated girls with their curvaceous forms and inviting lingerie soon overtook Americas national dessert, in terms of popularity, and even developed considerable potential as a cultural export during the 1940s. "Never show everything," was always the motto. Smiling prettily at the camera, the models exuded just the right amount of sex appeal without seeming too sophisticated or artful. They were the girls next door whose wholesome attraction soon made one forget the magazines deliberately trashy presentation. Their rosy complexions and innocent allures still titillate even in an age when far more graphic material is the norm. For everyone who enjoys pin-ups, push-ups and pulp style!

“To look at these pictures is to remember that there was a time when taking off your clothes was a potent gesture, when the mere fact of a naked woman could be thrilling.” National Post, Toronto