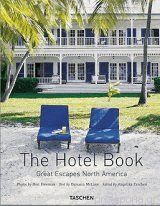 From the redwood forest to the Gulf Stream waters…

Following up on our Great Escapes Asia, Europe, Africa, and South America titles is this volume concentrating on the most extraordinary and tempting Canadian and American hotels. Ranging from funky and inexpensive to luxuriously elegant and wildly pricy, these hotels, inns, guesthouses, bungalows, ranches, lodges, resorts and even—yes—wigwams and treehouses will surely seduce you.

• blast from the past: mid-century shiny metal trailers with period interiors in Arizona

• shrine to 60s-70s kitch: a California inn where Liberace would have felt right at home

• a gorgeous lodge in Hawaii

• historic 1930s hotel in Texas where James Dean once stayed


The editor: Angelika Taschen studied art history and German literature in Heidelberg, gaining her doctorate in 1986. Working for TASCHEN since 1987, she has published numerous titles on the themes of architecture, photography, design, and contemporary art.

The author: Daisann McLane is the author of TASCHEN’s Cheap Hotels, which won the Society of American Travel Writers gold award for best book of 2003. She is a contributing editor and columnist for National Geographic Traveler magazine. For the last six years, she wrote the Frugal Traveler column for theNew York Times Sunday travel section. Her articles on culture, food, and travel also appear in the New York Times Magazine, and the International Herald Tribune. She lives in New York City and in Hong Kong.

The photographer: Don Freeman is a New York-based photographer who’s work appears regularly in Vogue, The World of Interiors, AD France and Architektur and Wohnen. Recently, he photographed Ted Muehling’s collaborations with Nymphenburg porcelain and Stuben glass. His work appears in galleries in the United States and in the collections of the Victoria Albert Museum in London, the Getty Museum in Los Angeles and others.