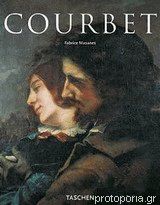 “I maintain,” stated Gustave Courbet (1819-1877), “that painting is clearly a concrete art whose existence lies only in the representation of real and existing objects....” Courbet, who influenced and advised the fledgling Impressionists, was an outstanding representative of a naturalistic realism that highlights the contradictions and inequities in society. Revolutionary were Courbet’s style, with dark hues and heavy brushstrokes, and choice of subject—depictions the life of plain people treated in an unsentimental, down to earth manner. His influence was enormous during his lifetime; he was offered the cross of the Legion of Honor in 1872 but he refused it. A man always at odds with authority, be it artistic or political, Courbet became a member of the Paris Commune and was briefly imprisoned and forced to flee to Switzerland for the final years of his life.

The author: Fabrice Masanes received his doctorate in art history and specializes in the 19th century art. He contributed to the Musee d’Orsay’s catalog Courbet et la Commune. Masanes currently teaches at the University of Paris in Vincennes-Saint-Denis.