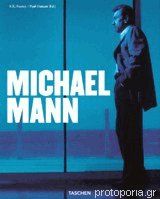 Mann of many faces

Over the course of the eight feature films he has directed since 1979, Michael Mann has shown himself, time and again, to be a rigorous, honest dramatist, a maker of solid worlds. So much so that in America, at least, he tends to be underrated. The most respectful of his critics often define him (a bit too simply) as a "realist." Certainly, whether the subject is thievery (The Jericho Mile, Thief, Heat), killers (Manhunter, Collateral), frontier life (The Last of the Mohicans), the nuanced struggle between the news media and corporate money (The Insider), or that of a celebrated athlete looking to find his life’s meaning in a world of bigotry (Ali), Mann seeks authenticity above all. Whatever suspense, entertainment value, and emotional or philosophical insight his work may yield rises from a truthfully imagined, painstakingly observed set of human beings and their warring intentions. This book explores Mann’s multifaceted oeuvre, including his most recent film, Miami Vice.

The author: F.X. Feeney is a screenwriter and critic based in Los Angeles. His film credits include The Big Brass Ring, based on a story by Orson Welles, and Frankenstein Unbound, directed by Roger Corman, whilst his reviews have appeared in L.A. Weekly and other publications. F.X. is also the author of TASCHENs Roman Polanski: The Complete Films.

The editor: Paul Duncan has seen lots of films and read lots of comics and books. He wanted to share his enthusiasm for these subjects so he published magazines about comics (Ark) and crime fiction (Crime Time) before launching a series of small film guides (Pocket Essentials). He edits film books for TASCHEN and wrote Alfred Hitchcock: The Complete Films and Stanley Kubrick: The Complete Films.