Reflections by Sea and Land in the Archipelago
Έκπτωση
10% 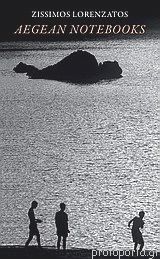 Zissimos Lorenzatos (1915-2004), essayist, thinker and poet, was arguably Greece’s most significant man of letters in the twentieth century. In the Aegean Notebooks, a record of his observations and reflections while sailing among the Greek islands in the 1970s and 1980s, the special quality of his literary and philosophical gifts, and of the man himself, are vividly present.
Along with everything a mariner yearns to bring ashore, all he has felt and experienced at sea with the wake of the boat unfurling behind him, Lorenzatos brings us in addition a lifetime’s learning and contemplation. For him, life, and the living of it, was of the essence. As he observes in his foreword to these notebooks: ...life itself writes nothing, it erases everything that is written about it, and simply, irreplaceably lives, like the inaccessible "well of water springing up".