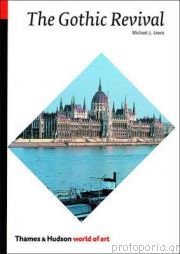 The Gothic Revival, writes Professor Michael Lewis, is more than a fashion craze for pointed arches and pinnacles. During its years of greatest influence, it subjected every aspect of art, belief, society and labour to intense intellectual scrutiny, using the Middle Ages as a platform from which to judge the modern world. The craze for Gothic Revival architecture spread throughout continental Europe and the USA from the eighteenth century, and shaped the face of Victorian England. It soon outgrew its religious and historical beginnings and was adopted in many countries to serve political or nationalist purposes. Pugin and Barry were two of the many dazzling talents of the nineteenth century; they are associated with many of Englands best-known buildings, most notably the Houses of Parliament. The Gothic style demonstrates energetically the confrontation of Western architecture with modernity, applying the inspiration of the medieval cathedral builders to the new engineering ideas of the industrial age. Professor Lewiss rich survey treats individual buildings and broad movements in England, Europe and the USA with fresh authority.
Συγγραφέας:
Lewis, Michael
Εκδότης:
B66ks
Σελίδες:
208
ISBN:
9780500203590
Ημερομηνία Έκδοσης:
1/6/2002