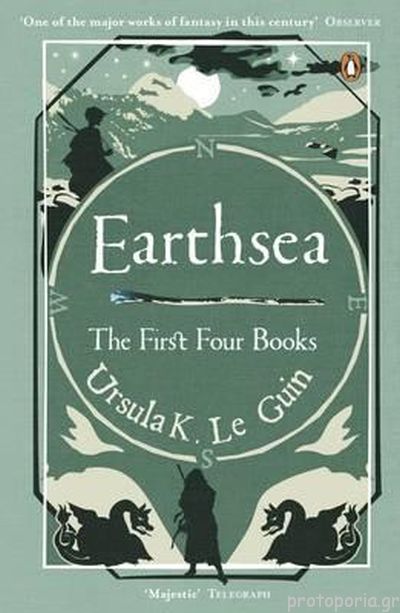 Discover the late Ursula Le Guins passionate and enthralling story of a young boy sent to a school of wizardry to learn the ways of magic in the opening quartet of the Earthsea story.

One of the literary greats Margaret Atwood

The deepest and smartest of writers. Her words are always with us. Some of them are written on my soul Neil Gaiman

Ged is but a goatherd on the island of Gont when he comes by his strange powers over nature. Sent to the School of Wizards on Roke, he learns the true way of magic and proves himself a powerful magician.

And it is as the Archmage Sparrowhawk that he helps the High Priestess Tenar escape the labyrinth of darkness. But over the years, Ged witnesses true magic and the ancient ways submit to the forces of evil and death. Will he too succumb, or can he hold them back?

Superb. One of literatures best-written fantasy worlds. I adored A Wizard of Earthsea, which I read and reread until my ratty old paperback copy required emergency surgery. Le Guins words are magical. Drink this magic up. Drown in it. Dream it David Mitchell

One of the greats. A literary icon Stephen King

A colossus of literature, a trailblazer China Mieville