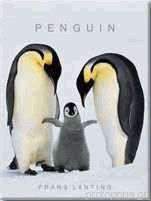 
Penguin is a celebration of the nature and beauty of penguins as expressed through the exquisite images and unique personal stories of master photographer and naturalist Frans Lanting. In a remarkable portfolio of photographs made during three expeditions to the icy kingdoms of penguins, he reveals both the amaz-ing natural history and the irresistible appeal of the most human of birds. He first traveled to isolated slivers of land in the Falkland Islands to cover the lives of "little penguins" - rockhoppers, Magellanics, and gentoos - and then made a rare circumnavigation of South Georgia by yacht, going ashore to camp among colonies of king penguins and capture the summer rush of birds breeding and feeding before the harsh deprivations of winter set in. Finally he flew to the edge of Antarctica and camped on the sea ice for a month to document the epic life story of the emperor penguin, which survives at the outer limits of life.

More than 110 photographs illustrate this moving portrayal of the birds many people feel they already know - but will see in a powerful new perspective through Frans Lantings eyes. Through his images, he carries us beyond the familiar views of penguins to reveal the stern beauty and dignity of their lives. "This book is a personal interpretation of the penguins I met, rather than a natural history of all penguins," Frans Lanting writes. "I wanted to create an impression of who these penguins are and what they go through. I hope my work will be seen as an homage to the individual within them all."

Frans Lanting (born 1951 in Rotterdam) moved to the United States to study environmental planning. Soon after, he began photographing wildlife - and never turned back. For the past two decades he has documented wildlife and our relationship with nature in environments from the Amazon to Antarctica. Lanting has received numerous prestigious awards, including top honors from World Press Photo, the title of BBC Wildlife Photographer of the Year, and the Sierra Clubs Ansel Adams Award. Exhibits of his photographs have been shown at major museums in Paris, Milan, Tokyo, New York, Madrid, and Amsterdam. He has published numerous books, among others "Eye to Eye" with TASCHEN.

"Lantings work towers over that of other wildlife shooters because of one thing: emotion. Look at these photographs and you immediately feel the presence of the animal before you."

"...Mr. Lantings photographs take creatures that have become ordinary and familiar and transform them into haunting new visions."