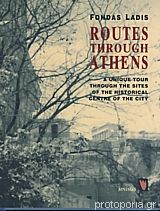 "Routes through Athens" is a personal tour through the historical Athens city centre to places where monuments from all periods of the citys history, from antiquity to the present day, stand side by side. The poems were written from 1995 to autumn 2001. Composer Christos Nikolopoulos has set eleven of these to music, along with five others of similar content not included in this volume. They were released on CD in December 2002 under the same title (in greek "Diadromes") as this volume of poetry.