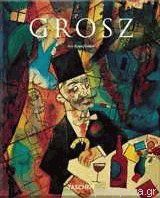 George Grosz (1893-1959) was one of the most important exponents of Dadaism, and therefore of political painting in general. He not only condemned both militarism and bourgeois culture, but also set himself in opposition to traditional forms of art.

The decisive element in Groszs paintings is their content: in them he pointed out defects in the political and social conditions, literally arraigning them before the public. For Grosz, painting served as a political instrument: "I drew and painted from a sense of contradiction and through my work tried to convince the world that it was ugly, sick, and phoney." Groszs paintings function as collages: the pictorial space is fragmented and thus takes on a futuristic aspect. Countless lines shoot through the pictures; the various visual planes collide with each other.

Fascinated by the metropolis, Grosz depicted the wild and dissolute life in the bars and nightclubs of the Weimar Republic in the 1920s. He directed his attention to the shady side of life and filled his canvas with caricatures of distorted figures. Grosz never permitted human beings to emerge as individuals, but instead always portrayed types, as representatives of a social level or class. The Nazis castigated his works as "degenerate art". After the publication of his candidly drawn "pornographic illustrations", Grosz fell under strong criticism in the 1920s.