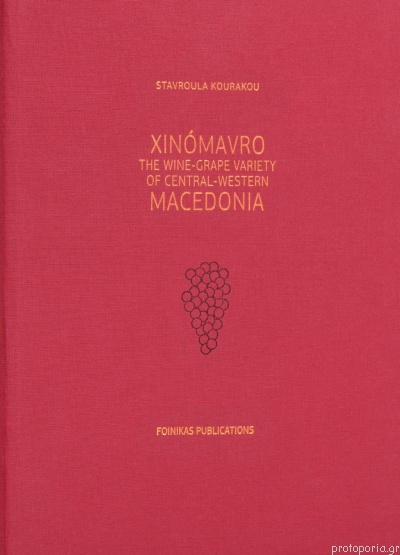 Xinomavro is a grape variety of Central-western Macedonia, cultivation of which is centred in the Prefecture of Imathia and specifically in the viticultural zone of Naoussa. From there it fanned out to the surrounding areas of Amyntaio, Goumenissa, Siatista, Velvendo and reached as far as Rapsani. In this last Community, it is referred to by the synonym Niaoustiano, which indicates that in years gone by cuttings brought from Naoussa were planted on the slopes of Lower Olympos.
I shall discuss these principal areas of cultivation of Xinomavro in Part IV of this book, after first describing in Part II the cultivar as a plant, so as to explain on the one hand the qualitative differences of the wines of the same type produced from this grape variety, and on the other Xinomavro’s capability of giving different types of wines, depending on the natural environment in which it bears fruit and the vinegrowing technique applied by the vinegrower.
What, we may ask, is the distinctive feature of Centralwestern Macedonia on the map of Greece? What historical memories does the land of the Macedonian kings bring to our mind? What is the cultural heritage of modern Macedonian wineproduction? What developments have taken place in viticulture and wine-producing in recent times?
These are the questions that preoccupy the friends of Xinomavro, as well as all those who wish to learn about it in its place of origin, and one which I shall endeavour to shed light, as succinctly as possible, in Part I and Part III respectively.
Stavroula Kourakou