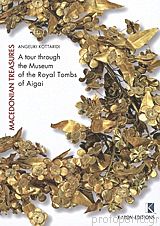 At the southern end of the Macedonian plain, nestling in the foothills of the Pierian mountains, in the heart of the area which was for Herodotus (Histories 7, 131) the "Μακεδονίς γη", the cradle of the Macedonians, is Aigai, the premier city of Macedon. The choice of its site is by no means fortuitous: it was here that the ancient land route passing through the Pieria range linked the Macedonian basin with southern Greece, meeting the road which commenced from the harbours of Pieria and led west and north, while the Haliakmon, an unfordable river to this day, protected the city as a natural fortification, securing its direct communication with the sea, which at that time was much closer.
Συγγραφέας:
Κοτταρίδη, Αγγελική
Εκδότης:
Καπόν
Σελίδες:
128
ISBN:
9789606878404
Μεταφραστής:
Δουμά, Αλεξάνδρα
Ημερομηνία Έκδοσης:
1/1/2011