Chronicle of a Life in Shipping 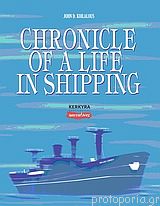 A personal narrative spanning close to sixty years of a career in shipping - from the authors humble beginnings in Chios Island in the 1930s, to apprenticeship and early work in London in the 1950s, and further to the establishment of a highly respected practice in Piraeus from the 1960s onwards, until the early years of the 21st century.


Interspersed with a wide spectrum of business personalities from the Piraeus, Athenian and London markets, illustrated by numerous cases of vessels in distress, underlining the importance of personal relationships as an oft-neglected but valuable by-product of ones career, and further enriched with the wisdom of someone with a long-lasting involvement in Greek shipping matters, John D. Koilalous Chronicle of a Life in Shipping is a must-read for those just entering the maritime sector, as well as veterans.


In the authors own words:

"In conclusion, all I have to say is that my involvement in the insurance world of shipping, and the claims sector in particular, gave me immense pleasure throughout these long years. It also gave me the satisfaction that I have offered some useful service to the shipping community at large and the particular client friends I have made during this period of my life. If I had another life before me, I have no hesitation in saying that I would follow the same course again.".