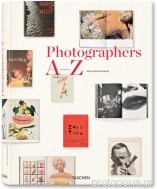 
An encyclopedia of 20th century photographers and their finest publications


A comprehensive overview of the most influential photographers of the last century and their finest monographs: Arranged alphabetically, this biographical encyclopedia features every major photographer of the 20th century, from the earliest representatives of classical Modernism right up to the present day.


Richly illustrated with facsimiles from books and magazines, this book includes all the major photographers of the last one hundred years—especially those who have distinguished themselves with important publications or exhibitions, or who have made a significant contribution to the culture of the photographic image. The 400 entries include photographers from North America and Europe as well as from Japan, Latin America, Africa, and China.


Photographers A-Z focuses on photographic images and culture, but also features photographers working in "applied" areas, whose work goes beyond the merely illustrative, and is regarded as photographic art and is conserved by major museums, such as Julius Shulman, Terry Richardson, Cindy Sherman, and David LaChapelle, et al.

Hans-Michael Koetzle is a Munich-based freelance author and journalist, focusing mainly on history and the aesthetics of photography. He has published numerous books on photography, including Die Zeitschrift twen (1995), Photo Icons (2001), Das Lexikon der Fotografen (2002), and Rene Burri (2004).