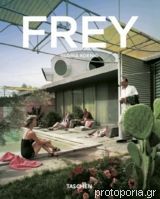 In 1930, when Albert Frey (1903-1998) came to the US from his native Switzerland, he brought the influence of his mentor, Le Corbusier, with him. The innovative Aluminaire House that he developed together with A. L. Kocher was exhibited in 1932 by Henry-Russell Hitchcock and Philip Johnson in the legendary show in the Museum of Modern Art in New York “The International Style: Architecture since 1922” as one of the very few American examples of the movement. Soon after, Frey discovered the California desert, where he would settle and complete his most substantial works. Throughout his life, Frey was interested in finding new ways of building, as well as working with and doing research on prefabricated materials, the results of which he regularly published. With visionary talent, Frey built elegant, clearly structured residential houses and was the founder of the “desert modernism” style.

approximately 120 images, including photographs, sketches, drawings, and floor plans
introductory essays exploring the architects life and work, touching on family and background as well as collaborations with other architects
the most important works presented in chronological order, with descriptions of client and/or architect wishes as well as construction problems and resolutions
an appendix including a list of complete or selected works, biography, bibliography and a map indicating the locations of the architects most famous buildings

Gloria Koenig is an architectural historian and author. She has published and lectured widely on a variety of topics in contemporary architecture, and served as consultant with filmmakers on a documentary about her late husband, modernist architect Pierre Koenig.