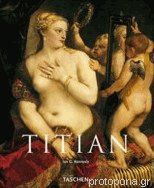 A leading artist in the High Renaissance, Titian (Tiziano Vecelli, 1488-1576) was the Venetian school’s greatest painter and is one of the best-loved Italian artists of all time. Titian was highly regarded during his lifetime, and his renown has not diminished in the intervening centuries; so great was his ability to manipulate color, texture, and tone that he is still considered to be one of art history’s greatest technical masters. The freedom exhibited in his pictorial compositions was unprecedented and greatly influential on later artists, notably Manet, who closely studied Titian’s work at the Louvre. This book examines Titian’s evolution, from his early years training under Giovanni Bellini to his later mature work, giving a wide perspective on the life’s work of this legendary master painter.

The author: Ian Kennedy studied art history at Cambridge and at the Courtauld Institute, London University. He worked for nearly three decades in New York at Christies and as a dealer and is now Ward Curator of European Paintings and Sculpture until 1900 at the Nelson-Atkins Museum in Kansas City, Missouri.