Piracy in the Mediterranean 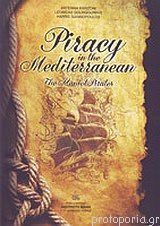 Pirates have held a fascination for lovers of adventure for many years - well before the cinema screen brought such dashing heroes as Errol Flynn and Johnny Depp, in his charismatic portrayal of Captain Jack Sparrow, into our hearts and minds.
There is something exciting about the lure of a pirate, that stirs the blood and creates idealistic images of dashing rogues and stolen romance. All fed by novels and movies of daring-do and breathtaking, exciting adventures of course.
The reality of pirates -corsairs, privateers, buccaneers- whatever title you want to give them, is somewhat different. Most were violent, murdering thugs, out for all they could get for as little trouble as possible. And piracy is still rife, especially in the eastern seas around Somalia; pirates are not made-up characters of novels and movies, they are real and very much in business.
This book, which is wonderfully written, sets out to explore this less-than-pleasant realistic side of piracy on the high seas, concentrating on the area around Greece and the Greek islands. The Caribbean has always been regarded as the main hunting ground for pirates, but the Mediterranean has had its own share of notoriety. It made a pleasant change to discover facts and details about piracy of a different part of the world.
This is a book to be enjoyed, and devoured - Im sure you will learn something you did not know about pirates and piracy. I certainly did!