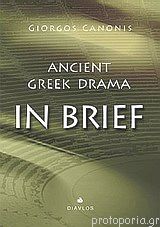 "Ancient Greek Drama in Brief" originates from two books by Giorgos Canonis, "Ancient Greek Comedies In Brief" and "Ancient Greek Tragedies In Brief" published in Greek in 2008 and 2009 to popular acclaim.
The worldwide appeal of ancient Greek drama led to the publication of the English edition of this book. As well as addressing those readers interested in learning about the dramas, we believe that this book will be of particular interest to those attending a performance of one of the plays in an ancient Greek theatre.