1821: The Founding of Modern Greece 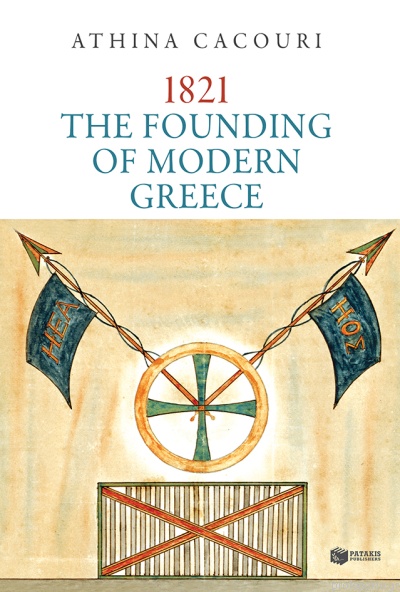 The distinguished historian Michael Llewellyn-Smith, author of the classic Ionian Vision as well as a number of other important studies about modern Greece, writes about this book: The story of how the Greeks founded their independent state, through a mixture of bravery, persistence, skulduggery and guile, is an inspiring one, and there is no better time to tell it than the 200th anniversary of the outbreak of the Greek war of independence in 1821. Athina Cacouri’s new book, 1821: The Founding of Modern Greece, tells the whole complicated story, from the outbreak of war in March 1821 to the emergence of a nominally independent state, in an English language narrative adapted from her Greek original in terms suitable for a young readership. The main focus of her book, rightly, is the leading Greek personalities, ranging from the doughty warrior Theodore Kolokotronis, whose vivid words on the ‘torment’ of leading an army of Greeks she quotes, to the western-influenced Alexander Mavrocordatos (for whom Cacouri has little love), and above all the tragic figure of Ioannis Capodistrias, the ‘Governor’ or first President of Greece, who did all in his power, with meagre resources, to create a well governed modern state. He was assassinated in Nafplion on 27 September 1831. Capodistrias is the first hero of this book. The other is the Greek People, to whose developing national feeling the emergence of the Greek state is largely owed. In what will be a crowded market, the book holds its own by the vigour of its narrative and judgements, and Athina Cacouri’s knowledge and love of her native country and its people.
MICHAEL LLEWELLYN-SMITH Born in 1928, in the town of Patras, Greece, Athina Cacouri has lived in Vienna, Austria and Philadelphia, USA, and mostly in Athens, Greece. She has children, grandchildren and great grandchildren. She has worked in a petroleum company, a shipping agency, in tourism and as a journalist and a translator. She has published four volumes of detective stories, eight historical novels, and three studies of history, all about Greece during the last two centuries. Her translation of Stephen Vincent Benet’s short story ‘The Devil and Daniel Webster’ and of Charles Dickens’s The Mystery of Edwin Drood, as well as her novels Primarolia, set in Patras at the end of the 19th century, and Thekli, set during the Balkan Wars of 1912-1913, have been awarded major literary prizes. Her most recent works are two studies of the political rift which divided Greece during World War I, and a fresh look at the Greek War of Independence, 1821, and the creation of the modern Greek state, a translation of which is the volume in hand.
Συγγραφέας:
Κακούρη, Αθηνά
Εκδότης:
Πατάκης
Σελίδες:
272
ISBN:
9789601689951
Μεταφραστής:
Cox, Geoffrey
Ημερομηνία Έκδοσης:
6/7/2020