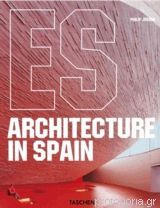 It might surprise some to hear that Spain has a vibrant culture of contemporary architecture. Delayed by the Spanish Civil War and the ensuing dictatorship under Franco, the emergence of modernity in Spain may have been late in coming, but today’s young architects are making up for lost time in a spectacular way. Original personalities like Cesar Manrique Cabrera marked a move toward the modern in the 1960s, while Richard Bofill’s innovative work in the ’70s helped bring Spanish architecture to the world stage. In the 1990s, architects such as Rafael Moneo and Santiago Calatrava began to create the look of contemporary architecture in Spain as we know it today. From a modern interpretation of a bullring to cutting-edge green architecture, the book covers a dizzying variety of architectural innovation.

TASCHENs new architecture series brings a unique perspective to world architecture, highlighting architectural trends by country. Each book features 15 to 20 architects—from the firmly established to the up-and-coming—with the focus on how they have contributed to very recent architecture in the chosen nation. Entries include contact information and short biographies in addition to copiously illustrated descriptions of the architects or firms most significant recent projects. Crossing the globe from country to country, this new series celebrates the richly hued architectural personality of each nation featured.