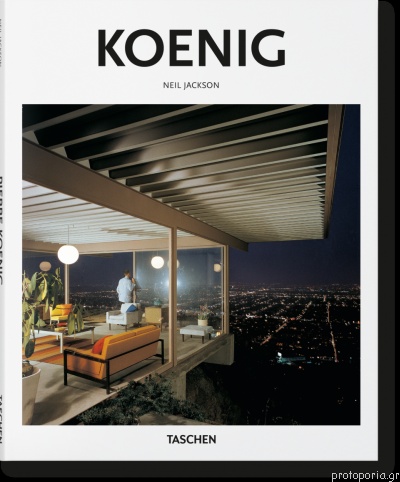 There are few images of 20th-century architecture more iconic than the nighttime view of Case Study House #22. At its eagle’s nest promontory above Los Angeles, the building is a vision of streamlined glass and steel, its slick lines echoing the twinkling city boulevards below. With this and his other equally innovative build for the famous project of the Arts and Architecture magazine, American architect Pierre Koenig (1925–2004) became one of the leading figures of the Modern movement.

While still a student of architecture, Koenig designed and built his first exposed steel house in 1950, proving that the use of prefabricated materials could allow for spatial freedom in affordable houses. Throughout his career, he would champion socially responsible design, as well as buildings that responded deftly and directly to the Southern California climate. Through windows, water, terraces, skylights, and glazing, his buildings optimized the rapport between inside and outside,while aiming for a simplistic purity of appearance.

Through all of Koenig’s major projects, including the Johnson House (1962) and Oberman House (1962), this book introduces an architect who was pioneering in method and material and iconic of his time, as fueled by experimentalism as the postwar optimism of the age.