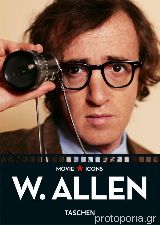 Flexicover, 14 x 19.5 cm (5.5 x 7.7 in.),
Woody Allens long and distinguished career has seen him evolve from stand-up comic to one of Hollywoods most original and prolific movie directors. This book celebrates his art, his life and his inimitable sense of humor.
Serious about comedy

From gag writer to Oscar winner and beyond

Woody Allen began his career writing jokes and scripts, progressed to stand-up and acting, then wrote and directed his first film, Take the Money and Run, in 1969. Like many of his early works, this screwball comedy starred Allen as a hapless, self-demeaning schlemiel who bumbles his way through preposterous and hilarious situations. After winning an Oscar for Annie Hall in 1977, Allen made Manhattan, Stardust Memories, and Hannah and Her Sisters, mining a deeper and more subtle humor based on personality and psychology. His later work revealed a poignant mix of tragi-comedy, charm and fantasy with The Purple Rose of Cairo, the nostalgia of Radio Days, the multiple plots of Crimes and Misdemeanors, and the bittersweet tone of Alice. The success of his recent Match Point, a tense, psychological drama, is proof that Allen is not yet through reinventing himself as a filmmaker.

All the icons in the second batch of the series were voted for by over 4500 TASCHEN readers in a special online poll!

About the editor:
Paul Duncan has edited 50 film books for TASCHEN, including the award-winning The Ingmar Bergman Archives, and authored Alfred Hitchcock and Stanley Kubrick in the Film Series.

About the author:
Glenn Hopp teaches film and literature at Howard Payne University in central Texas. His books include The Pocket Essential Billy Wilder, a guide to epic films, TASCHENs Billy Wilder: The Complete Films, and TASCHEN’s Grace Kelly.