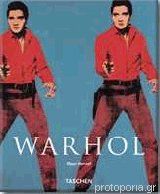 Andy Warhol is recognized today as the most important exponent of the Pop Art movement. He overturned the traditional understanding of art and placed in its stead a concept that retracts the individuality of the artist. Warhol was a critical observer of American society, exposing his compatriots consumerism in his paintings (Campbell- and Brillo series), as well as their fascination for sensational journalism. In 1963 Warhol founded his Factory in New York, literally a manufactory of ideas and work, which influenced film in the 1960s, published the influential magazine Interview in the late 1970s, and also produced Warhols own artwork: Warhol conceived the idea, and a worker in his factory carried it out. The work remained (consciously) unsigned - a fact which nevertheless did nothing to diminish Warhols reputation. He once complained that rich New Yorkers would willingly hang his "Electric Chain" in their living rooms - as long as its colours co-ordinated with the wallpaper and draperies.

Klaus Honnef studied history and sociology in Cologne and was a freelance sport and film journalist until 1965. He has organised exhibitions of contemporary art since 1968.