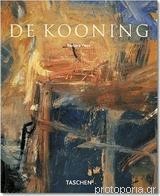 
“If you pick up some paint with your brush and make somebody’s nose with it, this is rather ridiculous…. It’s really absurd to make an image, like a human image, with paint, today.” —Willem de Kooning

Dutch-born American painter Willem de Kooning (1904-1997) was a leader of the abstract expressionist movement. Inspired by Arshile Gorky to abandon the realist style that had dominated his work in the 1930s, he began experimenting with abstraction in the 1940s and quickly gained critical success. His monumental Woman series of the 1950s—characterized by wild color and aggressive overtones— was received with both controversy and acclaim. He continued to paint until the late 1980s, leaving behind a vast and impressive body of work.

Barbara Hess studied art history and romance languages in Cologne and Florence. Based in Cologne, she is a freelance author and translator and has written extensively on modern and contemporary art for magazines including Camera Austria, Flash Art, and Texte zur Kunst.