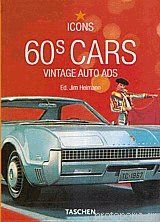 From the ubiquitous VW Bug to the short-lived Studebaker Avanti, this nostalgic look at 1960s cars brings automobiles from the swinging sixties back to life. Family cars and big-engine sports cars from Detroit mingle alongside classic and lesser-known foreign models as well as space-age inspirations such as the Comet, Polara, and Starfire. In its chronological sequence of 1960s automobile ads, 60s Cars reveals a significant shift in graphic design and print advertising over the decade: the widespread use of elegant illustrations that had traditionally been a hallmark of advertising was gradually replaced by photography in virtually all car ads.