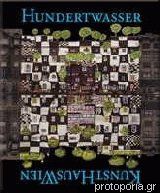 
"The architecture of the KunstHausWien is the first bastion against the false order of the straight line, the first bridgehead against the grid system and the chaos of the absurd", wrote Hundertwasser in autumn 1990, as finally a permanent site for his work was found. After four years of conversion work an old furniture factory in Viennas third district has become the KunstHausWien, a colourful and exotic addition to Austrias museum landscape. It has 4000 sq. metres of exhibition space. Two of the four floors house changing exhibitions of international art, while the other two show a permanent exhibition of Hundertwassers work. This MuseumGuide reveals the unique architecture of the KunstHausWien and shows a representative choice of Hundertwassers pictures, graphic work, tapestries, architectural models and stamps. It also contains various famous manifestos by the artist, such as "The third skin in the third district", "Window Dictatorship and the Window Right", "Tree Tenants are the Ambassadors of the Free Forests in the City", "Everything situated horizontally in the open air belongs to nature", and "The Uneven Floor".

Joram Harel has worked with Friedensreich Hundertwasser since 1972, and is the business manager and director of KunstHausWien.

Wieland Schmied is an art critic and essayist. He was, among other things, an archivist at the Berlin National Gallery and rector of the Munich Academy of Art. After his term finished he became President of the Bavarian Academy of Arts.