The History of Mens magazines vol.3 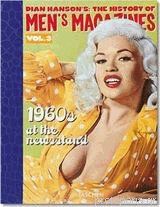 Open your notebooks, sharpen your pencils, and get ready for a history lesson like none you’ve ever experienced. You’re about to learn everything you could ever want to know about the world history of men’s magazines—not magazines about sports, not fashion, not hunting or fishing or how to build a birdhouse in ten easy steps, but those titillating periodicals embracing the subject dearest to all heterosexual men’s hearts and other body parts: the undraped female form. Former men’s magazine editor Dian Hanson traces its development from 1900 to 1980 in six massive and informative volumes.

For Volume 3 author/editor Dian Hanson searched the world for the mass-market men’s magazines of the 1960s. With the international economy on the upswing and censorship in a losing battle with lust the sixties were a time of great political, social and moral change. Suddenly hundreds of men’s magazine titles were right out in public, openly sold on newsstands all over the world.

Volume 3 begins with an explosion of new American men’s magazines following the redefinition of US obscenity laws in the late fifties. We examine the enormous impact of Playboy, not only on American titles, but on magazines worldwide. This is the decade when France finally declines as a great force in magazine production; England starts to show her pervy side; Argentina embraces burlesque; and Germany once again blends political activism with nudity. By 1965 even Australia has a booming men’s magazine industry. The volume ends with a look at those great back-of-the-magazine ads for party pills and the first inflatable “dates”.

The History of Men’s Magazines, Volume 3 contains over 400 full color pages of vintage covers and interiors and a well-researched text profiling quirky publishers and artists, individual magazines, and the place of it all in the Swinging Sixties culture. This hardcover volume is a fascinating instant collectable all on its own, and a must have to complete the six volume set of Dian Hanson’s: The History of Men’s Magazines.

The author: Dian Hanson is a twenty-five-year veteran of men’s magazine publishing. She began her career at Puritan Magazine in 1976 and went on to edit a variety of titles, including Partner, Oui, Hooker, Outlaw Biker, and Juggs magazines. In 1987 she took over the ‘60s title Leg Show and transformed it into the world’s best-selling fetish publication. Most recently, she authored TASCHEN’s Terryworld, Tom of Finland: The Comic Collection and Dian Hanson’s: The History of Men’s Magazines six-volume set.