The big book of breasts 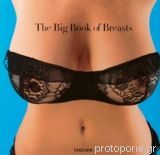 The 396 pages of this book contain the most beautiful and provocative photos ever created of these iconic women, plus nine original interviews, including the first with Tempest Storm and Uschi Digard in over a decade, and the last with Candy Barr before her untimely death in 2005. In a world where silicone is now the norm, these spectacular real women stand as testament that nature knows best.

Dian Hanson was born in Seattle in 1951. She has been TASCHENs sexy book editor since 2001. Prior to that she worked for 25 years making mens magazines, including Puritan, OUI, Outlaw Biker, Juggs, and Leg Show. Her many books for TASCHEN include The Complete Kake Comics and The Big Penis Book. She lives in Los Angeles.