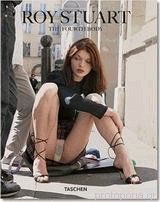 Sin on the steps of the Sacre Coeur

Roy Stuart has been at it again, traipsing around Paris from luxury apartments to the streets, capturing men and women defiantly acting out their sexual fantasies. From peek-a-boo panties to same-sex petting to more "indiscreet" activities, Stuart’s titillating mises-en-scene challenge us to break loose from traditional moral codes. Featuring not only young, perky-bodied women but also females of a certain age, these images are more hardcore and more daring than anything Stuart has ever produced. Also included are a rare interview with Stuart and images from his first feature film, giving a taste of what Stuart’s future offerings will bring us (he plans to devote himself solely to the moving picture after this, his final book).