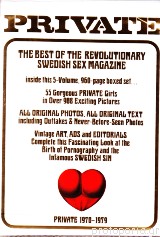 A graphic exploration of the origin of hardcore

Long, long ago, in the year 1965, there was no explicit pornography. There was the odd grainy stag film, the occasional French postcard, the rare Cuban chapbook or homemade Polaroid, but the glossy professional color pornography ubiquitous to modern society did not exist. The man who changed all that was Berth Milton of Stockholm, with his audacious little digest, Private. He and Private were directly responsible for Swedish Parliaments decision to treat sexually explicit materials as protected free speech, leading to the abolition of obscenity laws over most of northern Europe. With its smiling, exuberantly uninhibited models, Private created a fantasy of Sweden as the most liberated country on earth, a sexual wonderland that enchanted men around the globe. Publisher Milton was the magazines sole photographer, so the Private paradise was very much his personal dream. Genius and tyrant, he insisted on only the best for his magazine, rising in the 1970s to become the Hugh Hefner of Hardcore.

This five volume, 960-page mini-boxed set presents the best of Private from 1970 to 1979. Each 192-page book features seven to 10 of the best photo sets, arranged in chronological order, produced from the original color transparencies. Also included are photos never seen in the magazine, plus behind-the-scenes photos of Milton at work and all of the magazine covers. Vintage art, ads, and editorials complete this fascinating look at the birth of pornography and the infamous Swedish Sin.

Dian Hanson was born in Seattle in 1951. She has been TASCHENs sexy book editor since 2001. Prior to that she worked for 25 years producing various mens magazines. Her many books for TASCHEN include The Complete Kake Comics, The Big Book of Breasts, and The Big Penis Book. She lives in Los Angeles.