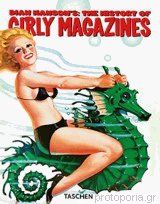 It all started around 1900, and wouldn’t you know the French were the first? Whether you call them men’s sophisticates, nudie books, or girly magazines, this long-ignored art form has a rich international history. Author Dian Hanson, a girly magazine editor for 25 years, follows the evolution of the genre from 19th century France through the Jazz Age, two world wars, the breast-centric 1950s to the end of the swinging 60s. Along the way you’ll see hundreds of vintage magazines from Argentina, England, France, Germany, Mexico, and the US. Some covers are exquisitely painted by top pin-up artists Enoch Bolles, George Quintana, Earl Moran, and Peter Driben. Others are posed by Hollywood stars like Jane Mansfield, Tina Louise, and Marilyn Monroe. All are fascinating artifacts of their time, including La Vie Parisienne, the first men’s lifestyle magazine from 1900; jazz-infused Sex magazine from 1926; legendary fetish digest Bizarre from 1949; Hugh Hefner’s Playboy from 1953; up to hippie-inspired Nude Rebellion from 1967.

In 33 chapters and 672 pages you’ll see these and many, many more, accompanied by a fact-filled, informative text sure to give you a new appreciation for the magazines once kept hidden under the mattress.

The editor/author: Dian Hanson is a twenty-five-year veteran of men’s magazine publishing. She began her career at Puritan magazine in 1976 and went on to edit a variety of titles, including Partner, Oui, Hooker, Outlaw Biker, and Juggs magazines. In 1987 she took over the ‘60s title Leg Show and transformed it into the world’s best-selling fetish publication. She is also the author of TASCHEN’s Terryworld, Tom of Finland: The Comic Collection, and History of Men’s Magazines six-volume set.