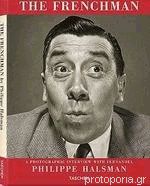 In New York in 1948, photographer Philippe Halsman had a chance meeting with Fernandel, a French movie star from the vaudeville tradition, and asked the actor to participate in a completely original photographic experiment. Halsman would ask Fernandel questions about America to which he would respond using only facial expressions. With his wide, lovable horse-face, Fernandel mimicked the answers to such questions as “Does the average Frenchman still pinch pretty girls in a crowd?” (silly grin) and “What was your reaction to the great American game of baseball?” (perplexed). Fernandel’s reactions are laugh-out-loud funny, and the book that resulted from this unusual collaboration is nothing short of wonderful. The Frenchman has been out of print for over fifty years, but TASCHEN’s reprint thankfully brings it back to life.

The photographer: Philippe Halsman (1906-1979) was born in Latvia but established his career in Paris in the 1930s, quickly becoming one of the country’s most famous portrait photographers. In 1940, he emigrated from France to the United States, where his career promptly soared as he began working for LIFE magazine, photographing such stars as Marilyn Monroe and Brigitte Bardot and completing a record 101 LIFE covers. His original style of portraiture brought a candid feeling to even the most elaborately posed photographs; Halsman had a keen talent for finding ways to capture the psychology of his subjects, often revealing hidden depths of their personalities. For his famous “jump” series, he photographed his subjects—including President Nixon and the Duke and Duchess of Windsor—as they jumped in the air. His photograph of Dali with a cat, canvas, and water all suspended in midair is one of the most famous images of the painter. Halsman’s contributions to the art of portraiture are innumerable, and his photographs will forever remain the defining images of mid-century American popular culture.