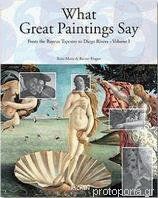 Masterpieces under the microscope: from ancient Egyptian papyrus scrolls to 20th century works

Did the Greek gods play tennis? What is the ambassador from the land of Alchemy telling us? What secrets are being told on the shores of the Island of Venus? What is a monk doing on the Ship of Fools? What Great Paintings Say has the answers to these and many other burning questions asked about the most important and famous paintings of all time. In two volumes, a selection of history’s greatest masterpieces is presented chronologically, including works by Botticelli, Breughel, Chagall, Courbet, Degas, Delacroix, Durer, Goya, Monet, Raphael, Rembrandt, Renoir, Rubens, Tiepolo, Titian, and many others. Each chapter focuses on one painting, with enlarged details and in-depth texts describing their significance. Taking apart each painting and then reassembling it again like a huge jigsaw puzzle, the authors reveal the history of art as a lively panorama of forgotten worlds.

Rose-Marie Hagen was born in Switzerland and studied History and Literature in Lausanne. Rainer Hagen studied Literature and Theater Science in Munich. Together, the two authors have produced 15 television films in the series “History in Pictures” and have published over 140 sequels to the series “Examining Paintings” in the arts magazine art, a selection of which makes up the contents of this publication.