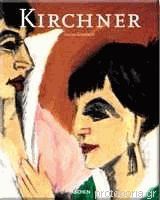 
Ernst Ludwig Kirchner (1880-1938) was a founding member in 1905 of Die Brucke, a group of artists who took German art to the radical edge of Modernism. Kirchner, a leading figure in the group, went on to paint some of the finest scenes of pre-First World War city life, in his pictures of prostitutes and men in the streets of Berlin. But the outbreak of war plunged him into a profound crisis, both mental and physical. Recovering in the Swiss Alps near Davos, he found a new subject matter in the mountains and the life of the Alpine farming communities. In 1938, with the Nazis in power in Germany and the art he stood for dismissed as degenerate, Ernst Ludwig Kirchner took his own life. This study traces the life and work of an artist in whom (as in van Gogh) the extreme ambitions and perils of modern art were united.

Lucius Grisebach (born 1942) wrote a doctoral thesis on Willem Kalf, a 17th century Dutch painter of still lifes, and then entered museum curating. He worked for the National Gallery in Berlin from 1974 to 1988, and since 1988 has been director of the Kunsthalle in Nuremberg, where he has organized numerous exhibitions of modern and contemporary art, including shows of Ernst Ludwig Kirchner as well as Panamarenko, A.R. Penck and Bridget Riley.