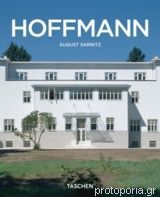 The influence of the Austrian architect and designer Josef Hoffmann (1870-1956) is extraordinary: for a period of over 60 years he kept up an aesthetic dialog with Modernism, the International Style, and Art Deco. Before being rediscovered in the 1980s by the Post-Modernists, his work was nearly forgotten; now his importance is unquestioned. As a designer he was one of the leading proponents of the Wiener Werkstatte, with its close connection to the Arts and Crafts movement. As an architect, he built the first modern buildings in Europe, such as the Purkersdorf Sanatorium (1904) and the Palais Stoclet (1905-1911). Traversing several styles and schools during his lifetime, his work shows a consistent Formalism. He abandoned Functionalism long before it became obsolete. In a historic sense, Hoffmann was doubly avant-garde: in both the rise and fall of Modernism.