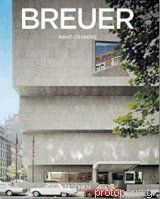 From steel tubes to reinforced concrete: the magical Modernist

In 1956, Time magazine called him one of the “form-givers of the 20th century“: with his invention of steel-tube furniture, Marcel Breuer (1902-1981) has made his mark in the history of design at the tender age of 23. He started his architectural career as one of the Bauhaus’s most influential architects with the 1932 Harnischmacher House. Even Breuer’s earliest work was marked by the search for a symbiosis between local and global, big and small, smooth and rough. His sparse use of materials emphasized the balance among textures, colors, and shapes. In 1943, he conceived the “binuclear” house concept—the splitting of living and sleeping areas into separate wings—which he first applied to the Geller House I (1944-1946), and which would attain great popularity. After designing the UNESCO headquarters in Paris (1953-1958), reinforced concrete, with its formal plasticity und structural elasticity, continued to give monumental character to buildings such as the Abbey and Campus of St. John’s University in Minnesota (1953-1961), the IBM Research Center in France (1960-1962), and the Whitney Museum of American Art (1963-1966) in New York City. With his keen sense of proportion, shape, and material, Breuer is one of the most important Modernists and is still very much central in the discussion of contemporary architecture.

The author: Arnt Cobbers wrote his doctoral thesis on the building of churches in mediaeval times. He worked as reviewer on architectural subjects and wrote several books on Berlin architecture as well as monographs on Frank Lloyd Wright, Karl Friedrich Schinkel, and Mies van der Rohe, amongst others.