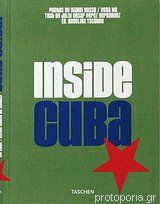 Fiesta Cuba: living in the Pearl of the Antilles

Described by Christopher Columbus as “the loveliest land ever beheld by human eyes,” Cuba’s sumptuous landscapes are marked by sun-drenched tobacco and sugar cane fields and its cities ripe with music, dancing, and jubilation. Celebrating the relics of Cuba’s revolutionary glory days, this book explores everything from the kinds of interiors seen in Buena Vista Social Club to top-notch luxury hotels and cultural heritage sites. Via a diverse selection of Cuban homes, hotels, gathering places, and more, Inside Cuba takes you on a colorful tour of Cuba’s most archetypal interiors. Just mix up a Mojito, pop in a Compay Segundo CD, and fire up a cigar—you’ll be in the perfect mood to savor these luscious Cuban gems.

traditional time-worn homes bearing the patina of generations of habitation


Partagas cigar factory, one of Havana’s oldest and finest


a home with a Lalique-designed interior


the bars Ernest Hemingway frequented, the hotel where he stayed between 1932 and 1939, and the estate near Havana he purchased in 1940, where he wrote The Old Man and the Sea

Gianni Basso is specialized in travel photography, architecture, and interiors. In 1989, he founded the photography agency Vega MG. His work has been widely published in books and magazines. He lives in Milan.

Julio Cesar Perez Hernandez, Loeb Fellow at Harvard Graduate School of Design 2001-2002 and adjunct professor at the School of Architecture in Havana, has lectured widely in the US and Europe about Cuban architecture. He is a member of the Union of Writers and Artists of Cuba and the recipient of several international and national awards. His writings have been published in the New York Times, Arquitectura Cuba and Arquitectura y Urbanismo.