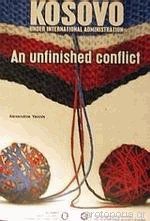 Much has changed in Kosovo and the surrounding region since the NATO bombardment of the Federal Republic of Yugoslavia (FRY) in Spring 1999 and the subsequent arrival of UNMIK and KFOR in June 1999. However, the destabilising potential of the Kosovo conflict remains today largely intact. The underlying cause of the whole crisis has not yet been addressed.
The Kosovo question is not a dispute over power or forms of government. It is a dispute over control of territory. It is about FRYs sovereignty and Kosovos independence. It is a dispute that stems from the unfinished process of the dissolution of the former Yugoslavia that still generates instability from Bosnia and Herzegovina through Montenegro and Kosovo to the southern borders of the Former Yugoslav Republic of Macedonia.
This book reviews and analyzes the roles of UNMIK and KFOR in preserving peace and building stability during the first phase of the international administration in Kosovo. It also examines changing developments in the region and provides policy recommendations regarding the involvement of the international community in Kosovo and the rest of the Balkan region.