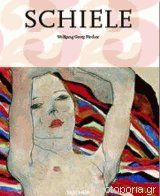 "Hindering the artist is a crime," wrote Egon Schiele in 1912. At the time he was in prison for disseminating immoral drawings. Throughout his work the note of defiance, provocation, and rebellion was sounded. Schieles favorite subjects were female nudes and self-portraits, and he worked at his art with furious commitment, though it was not until shortly before his early death that he began to win real recognition. Today, with Oskar Kokoschka, he is seen as the most important of the Austrian artists who came after Klimt. This study examines the life and work of Egon Schiele through all the major oil paintings and many of his erotic drawings.

The author: Wolfgang Georg Fischer is an art historian, writer and art dealer. Ever since first exhibiting Egon Schiele in 1964, he has devoted his attention to classical Viennese Modernism, chiefly Schiele, Kokoschka, and Klimt, regularly showing their works at his London gallery, Fischer Fine Art, and contributing with numerous publications to the art-historical literature. He also contributed to the catalogue raisonne of Schiele’s work and has written a monograph on Klimt`s partner, fashion designer Emilie Floge.