AN HISTORICAL AND ARCHEOLOGICAL GUIDE
Έκπτωση
30% 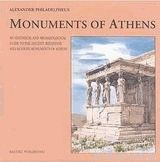 Since 1924, when the eminent archaeologist Alexander Philadelpheus, published his Monuments of Athens (in the original Greek Μνημεία Αθηνών) this work has been continuously updated by the author, and his descendents. It has been reprinted several times and has also appeared in a number of English editions with such success, that even today, after eighty years, it is still renowned as a unique and extremely valuable guide to Athens, its history and monuments.
This book is not written for specialists, archaeologists or connoisseurs; it is written for the majority of people who either live in, or visit Athens, and wish to know its history and its past and present monuments. It describes in brief everything of archaeological, historical and artistic value that exists in this ancient and glorious city and might be of interest to the reader who wishes to stroll around the most important points of archaeological and historical interest down town Athens following nine fascinating walking routes.
In addition to the text, all illustrations were also revised. Instead of the common pictures of monuments that abound in the majority of guide books, it includes original paintings with Athenian subjects executed by the skilful artist Ms Susanne Titzmann, graduate of the Berlin Academy of Fine Arts, who created for this edition a series of fifty-three unique watercolor paintings depicting the most important monuments of Athens.