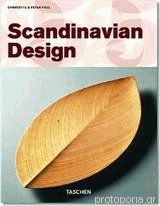 Scandinavians are exceptionally gifted in design. They are world-famous for their inimitable, democratic designs which bridge the gap between crafts and industrial production. The marriage of beautiful, organic forms with everyday functionality is one of the primary strengths of Scandinavian design and one of the reasons why Scandinavian creations are so cherished and sought after. This guide provides a detailed look at Scandinavian design from 1900 to the present day, with in-depth entries on featured designers and design-led companies, plus essays on the similarities and differences in approach between Norway, Sweden, Finland, Iceland, and Denmark.

The authors: Charlotte and Peter Fiell run a design consultancy in London specializing in the sale, acquisition, study and promotion of design artifacts. They have lectured widely, curated a number of exhibitions, and written numerous articles and books on design and designers, including TASCHEN’S Decorative Arts series, 1000 Chairs, Design of the 20th Century, Industrial Design A-Z, Designing the 21st Century, and Graphic Design for the 21st Century.