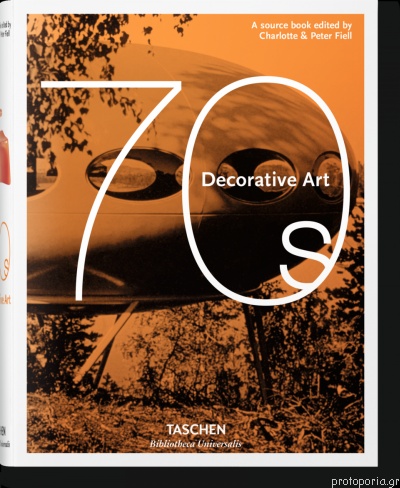 Published annually from 1906 until 1980, Decorative Art, The Studio Yearbook was dedicated to the latest currents in architecture, interiors, furniture, lighting, glassware, textiles, metalware, and ceramics. Since the publications went out of print, the now hard-to-find yearbooks have become highly prized by collectors and dealers.

This volume spotlights the futuristic, experimental aesthetic of the 1970s. After the revolutions of the ’60s, the world of design and architecture became an increasingly exciting and fast-moving hotbed of ideas, rife with vehemently opposing schools and movements. In many ways it was a more extreme era for design than the previous decade.

Experimentalism was everywhere, and many projects, thought not practical, were forward-thinking visions of a new kind of decorative art and design. Various groups advocated returning to natural methods, rejecting style in favor of craft or pushing the logic of industrial living to its concrete, high-rise extreme. Decorative Art 1970s includes the work of the decade’s brightest stars, such as Afra and Tobia Scarpa, Luigi Colani, Ettore Sottsass, Achille Castiglioni, Kisho Kurokawa, Norman Foster, Richard Meier, and Theo Crosby.