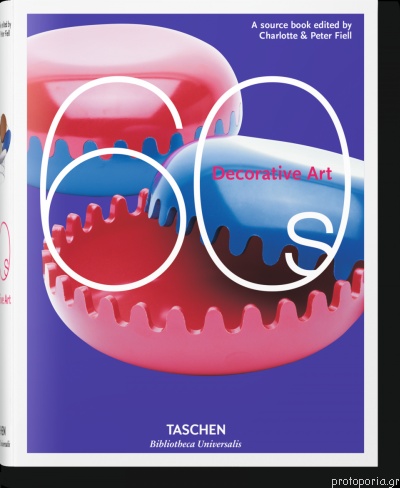 Published annually from 1906 until 1980, Decorative Art, The Studio Yearbook was dedicated to the latest currents in architecture, interiors, furniture, lighting, glassware, textiles, metalware, and ceramics. Since the publications went out of print, the now hard-to-find yearbooks have become highly prized by collectors and dealers.

Decorative Art 1960s looks at the birth of pop in a decade of unprecedented social, sexual, and political change. All the restless energies bubbling throughout the world during the 1960s made their way into the design style of the decade. Liberation was in the air, men were rushing to the moon, and the sky was the limit as far as visual creativity was concerned.

The concept of lifestyle really came into its own, and although the early years of the decade still saw a rivalry between the well-crafted object and the industrially manufactured, by its end both ethnic and pop iconography had gained equal foothold in the aesthetic. Light was also predominant in shaping interiors. Freedom of choice and personal expression were the buzzwords for the young consumer, and so the likes of Pasmore, Panton, Safdie, Sottsass, Paolozzi, and Lomazzi did what they could to oblige.