A Dream of Harmony
Έκπτωση
20% 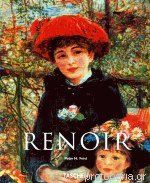 
Pierre Auguste Renoir (1841-1919) is now universally acclaimed: museums pride themselves on his paintings, crowds flock to his retrospectives. His work shows art at its most light-hearted, sensual and luminous. Renoir never wanted anything ugly in his paintings, nor any dramatic action. "I like pictures which make me want to wander through them when its a landscape," he said, "or pass my hand over breast or back if its a woman." Renoirs entire oeuvre is dominated by the depiction of women. Again and again he painted "these faunesses with their pouting lips" (Mallarme) and invented a new image of feminity.

Peter H. Feist was born in 1928 in Warnsdorf (Bohemia). He studied Art History, History and Archaeology in Halle, where he took his doctorate in 1958. From that year till 1981 he taught at the Humboldt University in Berlin, where he was appointed Professor of Art History in 1969. From 1982 to 1990 he was Director of a research department at the East Berlin Academy.