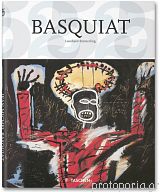 
From the streets to the galleries: the artist who turned the institution upside down


From the streets of New York to the walls of its most prominent galleries, young graffiti artist Jean-Michel Basquiat (1960-1988) was catapulted to international fame in his early 20s and died of a drug-overdose at 27. The subject of a feature film by fellow artist Julian Schnabel, Basquiat is one of the most admired artists to emerge from the 1980s art boom. This book explores his short but prolific career.

Leonhard Emmerling received his doctorate from the University of Heidelberg for a thesis entitled Kunsttheorie Jean Dubuffets. Since 2002 he has been working as an author and contemporary art exhibition curator in Berlin, Kaiserslautern, Krefeld and Ludwigsburg, Germany. His publications include TASCHEN’s Jean-Michel Basquiat and Jackson Pollock.