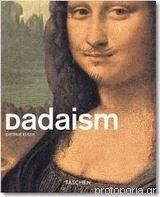 A precursor to surrealism, the Dada movement stressed the absurd and unpredictable, lashing out against traditional standards of aesthetics. Jean Arp, Marcel Duchamp, and Man Ray were among the most famous proponents of Dada, creating works that dared viewers to expand their notions of what can be considered art.

The author: Dietmar Elger studied art history, history, and literature at the University of Hamburg and received his doctorate in 1984. Since 1989 he has been curator of paintings and sculpture at the Sprengel Museum in Hannover. He was responsible for exhibitions and publications on a number of artists including Richard Tuttle, Keith Sonnier, Raimund Girke, Allan McCollum, Gerhard Richter, Donald Judd, and Andy Warhol. His book on Expressionism was published by TASCHEN in 1988.