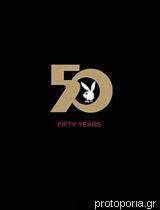 Relive Playboys fifty-year history with this sweeping retrospective of the groundbreaking magazine that grew from Hugh Hefners pet project into an icon as recognizable as Disney and Coca-Cola. Visit Hefs Playboy Mansion, canoodle with his delectable Bunnies, tour the DC-9 Big Bunny jet, experience the sizzling atmosphere of the Playboy Clubs, read the best Playboy interviews, original fiction, and humor, cackle at the irreverent cartoons and social satire pieces, and - of course - admire each Playmate of the Month since the first issue (all six hundred of them!). All of the magazines most glorious moments are highlighted in this extravaganza of Playboy nostalgia.

With an introduction by Hugh Hefner

Hugh Marston Hefner was born in Chicago on April 9, 1926. The first issue of Playboy magazine, featuring the now-famous calendar photo of Marilyn Monroe, was produced in 1953 on a kitchen table in his South Side apartment. Playboy grew at a phenomenal rate and by the end of the decade, the magazine was selling more than a million copies a month. At the start of the 60s, Hef began to live out the "Good Life" depicted in the pages of his publication. He hosted a popular syndicated television show called "Playboys Penthouse," purchased the Playboy Mansion, and opened the first Playboy Club on the Near North Side of Chicago. Throughout the 60s, Hef and Playboy became what Chicago columnist Bob Greene has called "a force of nature." Hef wrote an extended series of editorials titled "The Playboy Philosophy," championing the rights of the individual and challenging the countrys heritage of puritan repression. By 1971, when Playboy Enterprises went public, the magazine was selling 7 million copies a month and there were 23 Playboy Clubs, resorts, hotels and casinos with more than 900,000 members worldwide. Hef established a second residence in Los Angeles, which quickly became known as Playboy Mansion West, and in 1975 decided to settle there permanently. In 1980, Hef championed the reconstruction of the Hollywood sign (then in serious disrepair) and was honored with a star on the Hollywood walk of fame for his efforts.

Since the mid-80s, daughter Christie Hefner has served as Chairman and Chief Executive Officer of Playboy Enterprises, but Hef continues to serve as the magazines editor-in-chief, plays a key role in determining the path of Playboy Enterprises, and directs other areas of the corporation including cable television and video production.

The editor: Before her retirement from the magazine in August 1992, Gretchen Edgren was a Senior Editor of Playboy. In that capacity, she assigned, edited and supervised copy for several sections of the magazine, and as a Playboy writer, she also interviewed a number of noted figures, including Erica Jong and Clint Eastwood. Since her retirement, Edgren has been a Playboy Contributing Editor.