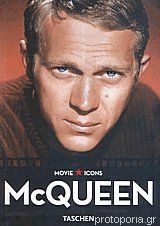 Steve McQueen found it hard to balance worldwide fame with a desperate need for solitude. Through performances that were effortless yet powerful, he connected with the people who saw him on stage, on television, in movie houses, and on magazine covers anywhere on earth. Sometimes more comfortable racing a motorcycle than in front of a camera, twice at the height of his stardom he took more than a year off from movies. Despite this, and despite dying young, he left an indelible imprint. Images, his own words, and the words of others chronicle his rise from juvenile delinquent to the highest paid star in Hollywood.

The author: Alain Silver has co-written and co-edited a score of books including The Samurai Film, The Noir Style, The Vampire Film, Raymond Chandler’s Los Angeles, director studies of David Lean and Robert Aldrich, and four Film Noir Readers. His articles have appeared in numerous film journals, newspapers, and online magazines. He holds a Ph.D. from UCLA and is a member of the Writers Guild of America west and the Directors Guild of America.